Climate change is here, now, and we need our next government to act like our lives depend on it. See where the parties stand on protecting our generation from climate damage: 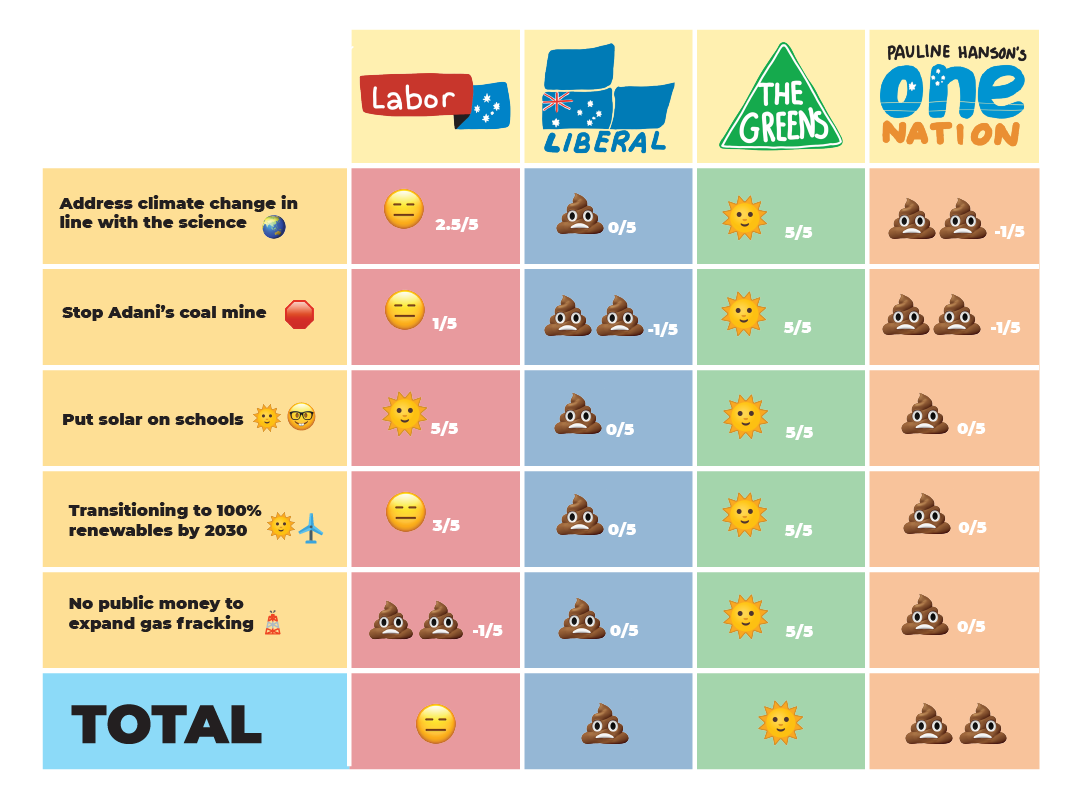 Our future is on this line this election.

Scientists tell us that to keep global warming below 1.5 degrees, 90% of Australia’s fossil fuel reserves need to stay in the ground [1], and rapidly transition our power supply to renewable energy.

See where the parties stand on protecting our generation from climate damage.

Read more below about how the parties stack up and our scorecard methodology...

Committed to keeping warming below 1.5 degrees in principle but their policy does not reflect this. They still refuse to move Australia beyond fossil fuels, and their emissions reduction target of 45% is the lower end of the Climate Change Authority’s recommendation back in 2015 and will not secure a safe climate future. All talk, no action, 2.5 points

Labor is sitting well and truly on the fence when it comes the Adani mine. While they won’t give any public money to the project, and there are some MPs and candidates who are personally against the mine, they refuse to commit to stop the mine if elected. Adani’s mine will be a disaster for our climate, water and Aboriginal land rights.

Labor’s renewable energy target is 50% renewables by 2030, a figure that AEMO (the Australian Energy Market Operator) says is in line with status quo of renewables growth - more ambition is required.

Labor get one point for their policy to establish a Just Transition Authority (JTA) to help with the planned closure of coal fired power stations, but their timeline is undefined and not in line with the science of moving off fossil fuels to avoid 1.5 degrees of warming. The JTA should also apply to mining and export jobs, and the whole community, not just workers.

Labor have committed $1 billion in concessional loans for solar power and batteries to schools, connecting them up to be virtual power plants. The plan will extend to up to 4000 schools, it is not additional money to the Clean Energy Finance Corporation. Great times! Students in NSW and VIC have been calling for this for 3 years!

Labor plans on giving a big $1.5 billion handout to open up the Galilee, Bowen (QLD) and Beetaloo (NT) basins to unconventional gas (fracking) through a revamped Northern Australia Infrastructure Fund (NAIF). Fracking the Beetaloo alone is equivalent to 50 coal fired power stations running for 40 years - this is a climate disaster and is not in line with Labor’s ‘climate leadership’.

Read the Labor press release or recent news coverage of this issue.

Aka the Liberals or "the Coalition"

The LNP has not committed to keeping warming below 1.5 degrees. Their emissions reduction target of 26-28% below 2005 levels is not in line with the Climate Change Authority’s recommendation and will not secure a safe climate future. Several members of the LNP are open deniers of the science of climate change and actively undermine the party’s attempts to address the problem.

Article about climate denial in the LNP: https://bit.ly/2H3SYa8

The LNP have given several questionable and rushed environmental approvals for Adani’s coal mine, and have tried throughout their entire term to prop up Adani with public money (NAIF and EFIC under Turnbull). There are many Queensland members of the party who are extremely close with Adani and the party has accepted $60,800 in donations from the company. This party loves a new coal mine, -1 point for you.

Read the Environment Minister's media release approving Adani's plans, or this article regarding Adani's corporate influence in the LNP.

The LNP has no renewable energy target, they want to bankroll new coal burning power stations and actively undermine State Governments’ attempts to go big on renewable energy construction. There was no new money added to the Clean Energy Finance Corporation in the most recent budget. Stuck in the past, 0 points.

The Liberal Party has literally no plan for solar in communities. There is no mention of solar or renewables in the whole budget, even though it will help bring down school’s power prices. No vision, 0 points.

This is their 'Lower Power Prices' policy' which does not mention solar but speaks negatively about renewables.

Their 'Protecting our Environment' policy does not mention solar, only the plans to build a hydro power station and a connection from Tasmania to the mainland.

In the 2019-20 budget there is $8.4million set aside for fracking projects in the Beetaloo Basin (NT). Scott Morrison threatened to cut States and Territory’s GST payments if they implemented fracking bans. The LNP loves a fracker, 0 points

The Greens policies and targets are in line with keeping warming below 1.5 degrees as per the Paris Climate Agreement, and climate change is the number 1 priority of the party. 5 points.

The Greens have been actively fighting to stop the Adani mine from in Parliament for the last 6 years, and have a policy of no more coal mines. They have tabled several bills which could stop the mine, asked questions and challenged pro-Adani MPs and Senators and have worked to find as many ways to stop the mine as they can. Good job, 5 points.

The Greens target is 100% renewables by 2030, including a planned, fair and rapid phase out of coal and gas stations. Good one, 5 points.

The Greens have a solar gardens policy: $100million-$1 billion for community buildings and schools to be retrofitted with solar and batteries. This funding would come from the Clean Energy Finance Corporation (CEFC). This is not just for schools, but would create community energy hubs, 5 points.

The Greens want an immediate ban on all new fossil fuel extraction, that includes dangerous gas fracking. No public money, stronger environmental regulations and an end to fossil fuel company political donations are all part of their platform, cool 5 points.

Pauline Hanson’s One Nation straight up doesn’t believe in the science of climate change even boasting that they are the only party to question the science. They also want Australia to withdraw from the Paris Agreement. Seriously dangerous dinosaurs, -1 point

Pauline Hanson’s One Nation literally looooves Adani’s coal mine (and their $15,000 donation). Since the donation went through they have been a massive advocate for the company including voting several times for Adani’s mine and turning out to pro-Adani rallies. Booo, -1 points.

Pauline Hanson’s One Nation doesn’t have much of an energy policy except to build new coal fired power stations. They ignore the fact that renewables can provide baseload power. They hate solar and are calling for a senate inquiry into solar panels. Pauline Hanson continues to attack other parties’ renewable policies and also advocates for nuclear power. Sucky, 0 points.

Pauline Hanson’s One Nation has no policy for solar on our schools. They haaaate solar and are calling for a senate inquiry into solar panels in Australia. Bad times, 0 points

Pledge to keep climate action top of mind when you're casting your vote on May 18.

Help us reach our goal of 185 pledges