We need to talk about climate refugees

As our world’s climate changes rapidly from fossil fuel companies burning dirty coal, oil and gas, it is expected that we will see enormous shifts in mobility and migration throughout the world.

While estimates of exact figures differ, predictions place the number of people that will be displaced due to global warming at anywhere between 25 million and 1 billion people. Extreme weather, natural disasters, rising sea levels and drought threaten communities in various ways - through water scarcity, food shortages, destruction of housing and infrastructure, and spread of disease. All of these are directly impacting health, welfare, and social security; making climate change not only an environmental issue, but also of social justice.

Naomi Klein, a Canadian author, social and environmental activist, explains that climate change is already causing violent conflict, poverty and social inequity for much of the world’s most vulnerable, as they unjustly feel the “toxic burden of our collective addiction to fossil fuel”. This has been felt in places like Somalia and Syria, where years of drought and agricultural crises resulted in violent conflicts that have stretched on for years now, leading to the biggest mass refugee crisis since World War II.

Drowning in the Pacific

Since 2011, approximately 140 million people have been forced to relocate due to climate related events and conditions, and the UN predicts that by 2050 approximately 1 in 30 people could be displaced.

Small island nations in the Pacific Ocean are drowning from sea level rise, caused by global warming from burning dangerous fossil fuels. In 1984, one of the six islands in the Carterets was divided in half, and the entire country is predicted to be submerged at some point between 2040 and 2050. Presently, locals have been unable to grow their own food due to poor conditions, which has resulted in them becoming heavily reliant on the government for food.

Similarly, Tuvalu has experienced rising sea levels and extreme weather, disrupting the people’s way of life. This has led to one fifth of the country’s population to flee, as land loss and restricted access to water become increasingly common.

Another island nation, Kiribati, one of the countries with the least contribution to worldwide carbon emissions, is also predicted to be significantly submerged within the next 100 years. Kiribati’s case is not exclusive by any means either, as many of the countries that have done the least to contribute to global warming, will experience the worst of its effects.

Australia too has it's own group of islands that are threatened. For communities in the Torres Strait, climate change is not a matter for political debate, but a reality. Like in the Pacific Islands, Aboriginal and Torres Strait Islander people are fighting to protect their country and culture from the on-going impacts of colonisation and climate change. Climate refugees have no legal protection...yet

One of the biggest challenges that climate refugees face however is the lack of international legal protection that they face. Climate is not included as a reason for applying for refuge in the 1951 UN Refugee Convention, which means that there is no legal framework that keeps climate refugees safe or even views them as ‘legitimate’. This means that the 200,000 people who become displaced each year in Bangladesh due to river erosion are unable to apply for refuge, as environment and climate are not recognised in the Geneva Convention the same way that fleeing persecution or war is.

People suffering from devastating global warming impacts are becoming trapped within a cycle of worsening conditions, as they do not have formal opportunities to seek refuge. How do we fix this mess?

While things seem bleak, things have begun to change and world leaders are beginning to address the deadly impacts global warming is having on global mobility patterns. For example, COP21 in Paris 2015 called on a task force to “develop recommendations for integrated approaches to avert, minimise and address displacement related to the adverse impacts of climate change”.

Much of the international discussion into climate change policy has been about reducing emissions, which while obviously is required to mitigate global impacts of burning dirty fossil fuels, fails to address the fact that communities need assistance adapting to changing conditions.

Adapting to climate change is just as important as mitigating climate pollution, and this is because we are already living in a world that is getting hotter, and we need to address the injustices happening right now instead of waiting for them to get worse. Some argue for altering the Geneva Convention to include climate and environment as reasons to seek asylum, whilst others believe this will be too restrictive and instead an entirely new international agreement is required to deal with the future projected mobility patterns as a result of climate change.

Other solutions could be international funds, organisations and facilities that deal specifically with the relocation of climate refugees, as their homes become more and more uninhabitable. Better equipped strategies to deal with extreme weather and natural disasters can also help to reduce the amount of damage that communities experience. Whatever the solutions we come up with are, we need to act now.

The Australian Government must take action

The Australian government has so far given little support to the relocation of climate refugees, many of whom are our neighbours in tiny islands in Oceania. The funding for planned controlled evacuations of 1700 people from the Carterets have so far fallen at the hands of community groups such as churches, despite wealthy nations such as Australia having the capacity to provide support. Instead, the Australian Government seem fixated on short-sighted visions of expanding Australia’s coal industries - an action that places profits above millions of lives and complete nations.

It is time governments around the world, including our own, begin taking the issue of climate refugees seriously, recognise their status as valid refugees and work to rapidly transition to 100% renewable energy and provide justice and protection to frontline communities devastated from sea-level rise and many other global warming impacts they face.

Also, they really need to stop Adani's dangerous coal mine in Queensland and all new fossil fuels. Click here to StopAdani. 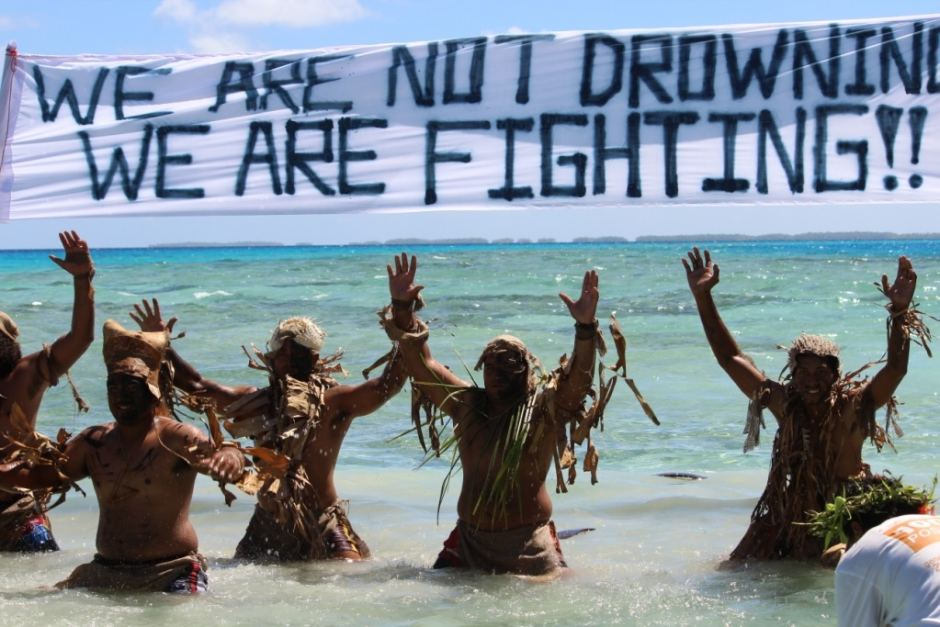