Text the QLD Opposition Leader Tim Nicholls on his cell phone and tell him to block Turnbull’s $1 billion taxpayer handout to Adani. Here's his number:

QLD Opposition Leader Tim Nicholls is asking you to contact him. He is doing and saying everything he can to back Adani right now because he hasn’t personally felt the power of the Stop Adani movement. We can show him just how out of touch he is with Queenslanders.

70% of Queenslanders don’t think Adani should get a $1 billion hand out to build their coal mine, so it’s time for Nicholls and the LNP to stand on the right side of history and block the loan.

Last week Palaszczuk stood true to her previous election promise of not sinking public money into the Adani mine. She committed to vetoing the loan, but can’t do that without bi-partisan support from the LNP. So it’s time to buzz Tim Nicholls.

Texting Tim will be so fun. Here are some example messages that you could send:

Hey Tim, Queensland is awesome! I’d love if we could keep it that way by ruling out giving $1 billion to Adani’s coal mine. What do you reckon?

Tim, the only way to bring down power prices is to invest in 21st century technology like solar, wind and wave, and leave fossil fuels in the past where they belong. Will you stop Adani?

G’day Tim, 70% of Queenslanders reckon a billion taxpayer dollars for coal mining billionaire Adani is a bad idea. Keen to veto the loan and stop the mine?

Tim, if you're serious about protecting the Reef, you need to stop Adani. You with me?

If you get a response worth us knowing about email info@aycc.org.au 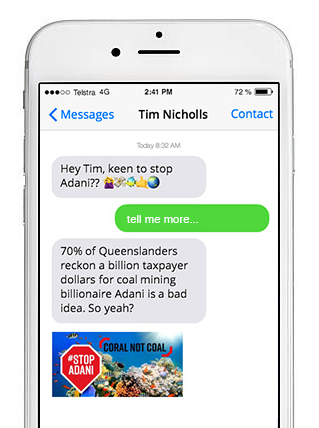