24-hour solar power - that’s the dream right? Jay Weatherill has the power to get it done, but right now, SA’s energy is the middle of the national energy debate, fuelled by Turnbull and his out of date fossil fuel mates.

The State Government has just announced $150 million dollars for new renewable energy storage tech (great!), and funds for a new gas-fired station and fracking for SA (not great!). The Premier also announced the State Government would use it's power purchase to support a new power station in SA and they'd announce it by June - the only real solution is 24-hour solar thermal power for Port Augusta.

Put this ad in the Advertiser so the message is right under Jay's nose, and put the pressure on him and Malcolm Turnbull to make solar thermal happen: 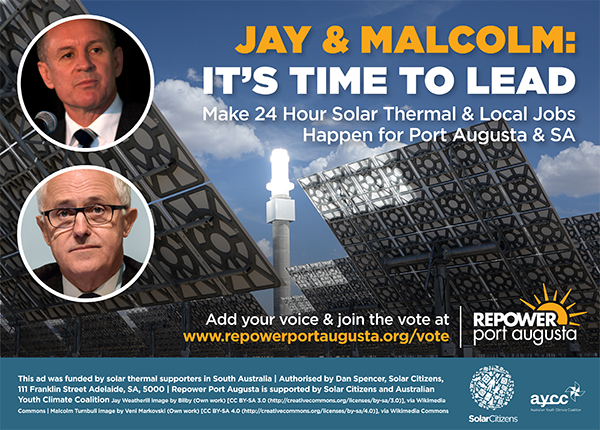 Data entered in this form (excluding any financial data) will be stored in a shared electronic case management system which will be accessed by relevant members of AYCC staff and volunteers. Your information may also be stored in a paper file held securely by AYCC. We are working in partnership with another organisation, Solar Citizens, on this campaign. Due to this partnership we will be disclosing all data stored on the campaign with Solar Citizens. We have an agreement in place to ensure data sharing complies with our stringent data protection and information security requirements.