Hope for the future

It’s not often that we reflect on how much incredible change we are making. When you’re so busy fighting the bad guys, it’s easy to forget to reflect on the wins along the way.

What we achieve together in this movement to solve the climate crisis blows my mind. In our 10th year, the Australian Youth Climate Coalition, along with the Seed Indigenous Youth Climate Network, and all of you, are kicking some major goals. To make sure that we can continue to stand up fossil fuel companies and their friends in government, donate $8 this tax time.

We can’t do it without your help. Thousands of people like you make small donations that mean we can do powerful things together - win campaigns, empower young people and shift the politics.

Across the country thousands of young people are doing incredible things and that’s what gives me hope for the future.

Our 3 year campaign against Australia’s second biggest bank saw Westpac finally rule out investing in coal basins, the last of the big 4 Aussie banks to walk away from Adani’s coal mine because of our relentless public pressure. 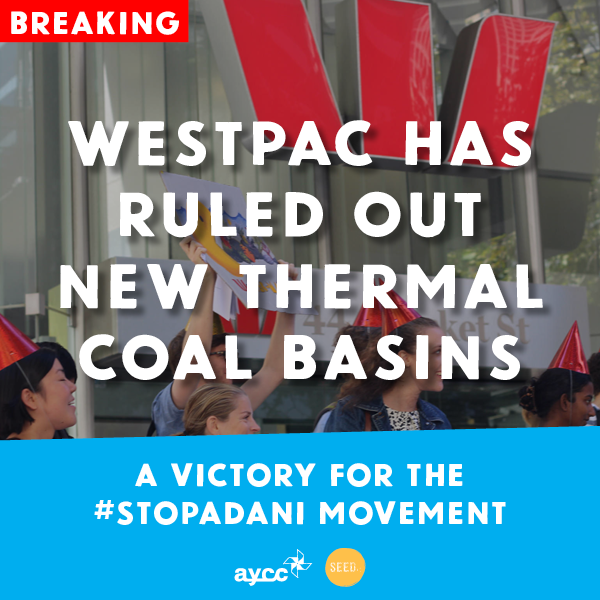 Volunteers and community members are keeping Turnbull and Frydenberg on their toes with weekly actions at their electorate offices calling on them to rule out giving a billion dollars to a coal mining billionaire. In the last two months alone we've held 40 actions with over 600 people outside key politician’s offices.

To be able to build their disastrous mine, Adani need cash and someone to cover their giant debt. Right now 23 banks won’t touch the mine, but the Australian and Indian governments are still considering it. We’ll keep up the pressure so that it’s politically toxic to give taxpayer money to a coal mine. There’ll be massive rallies, cheeky protests, and plenty of opportunities for you to make sure this $1 billion handout doesn't go ahead.

When George Brandis and the government tried to sneak through changes to Native Title, we did not let him. Seed mounted a powerful campaign, knowing that many communities wanted to have a say. 20,000 people wrote submissions in 48 hours, we put a powerful message on Parliament lawns, and commissioned a poll of Indigenous people across the country. 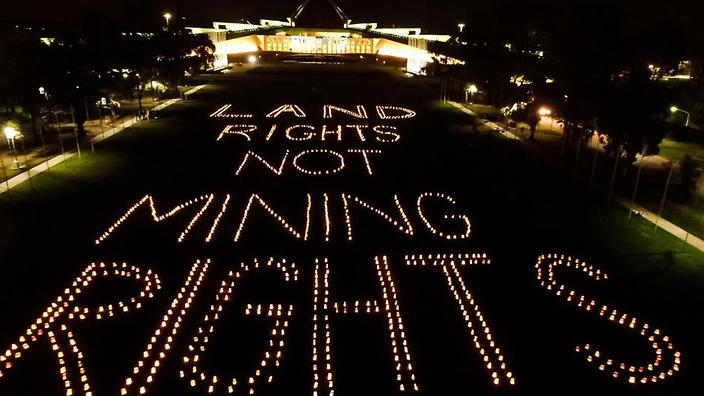 Make no mistake, these changes to Native Title were designed to appease Adani, a company with no consent from the Wangan and Jagalingou Traditional Owners. And they have far-reaching affects on communities across their country and their ability to protect their country from fossil fuel extraction.

Labor sided with the government last week to vote these changes to Native Title through, but we know this is just the beginning of the Government’s attempts to dismantle our land rights. We will continue fighting to protect country and land rights until we win.

Banning fracking in the NT

Seed is working with Aboriginal communities across the Northern Territory who are protecting their country from dangerous shale gas fracking and pipelines. From community surveys, to awareness raising and training, you’ll be hearing a lot more about this campaign in the coming months. 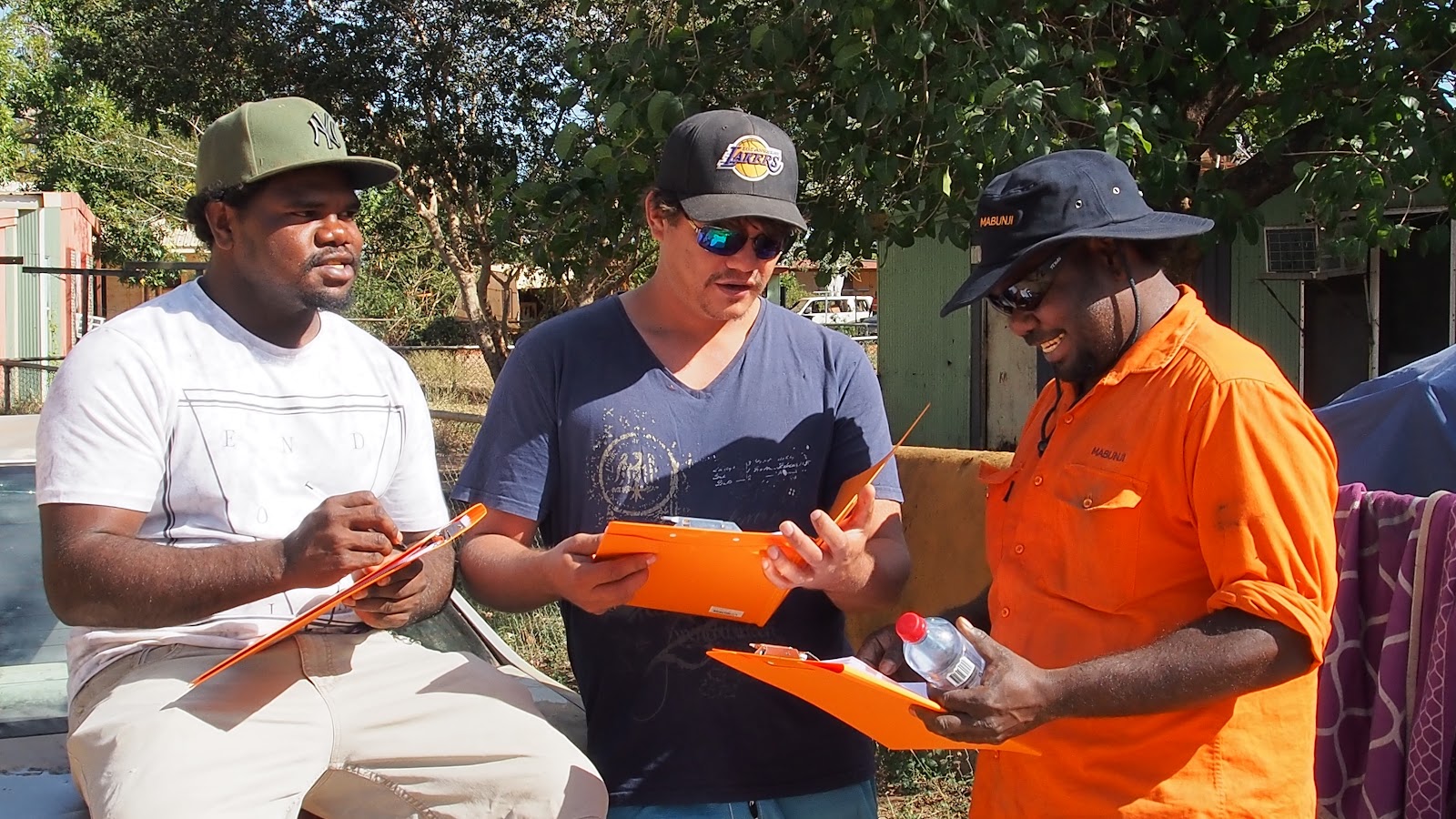 Part of our core work is helping young people to realise that when they work together they can change the world. The Repower our Schools campaign is about students leading campaigns to make their school more sustainable, with solar panels, energy efficiency, community gardens and more.

Already this year we’ve held 3 local schools summits and inspired 1500 students to take action in their communities -- it’s all youth-led and so much fun. 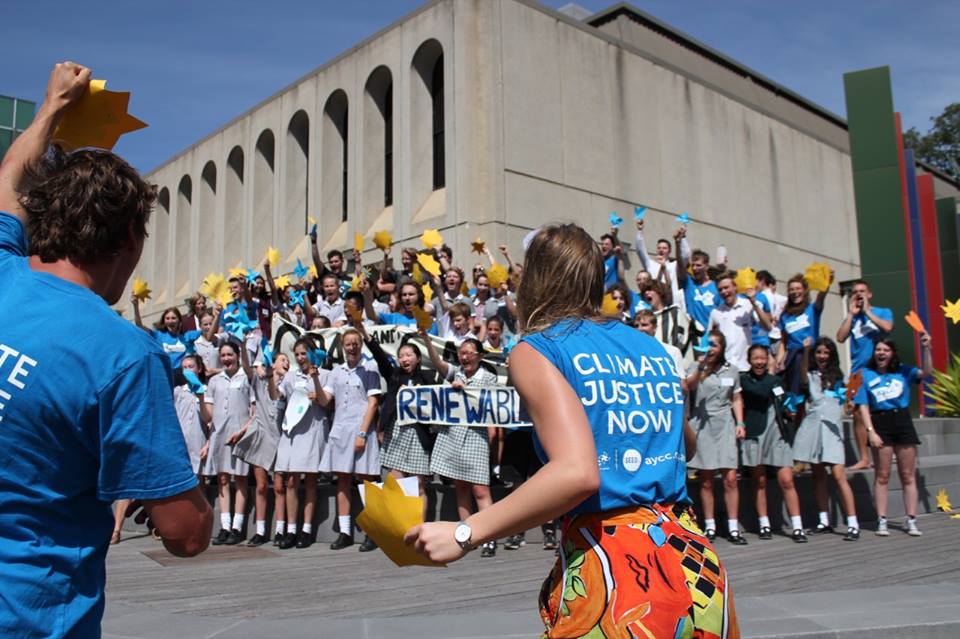 This July, 800 young people will come together for 3 days of action, skill sharing, inspiration and connection to learn how we can create a better world for us to grow up in. We’ve held Power Shifts before and every single time they’ve catapulted our movement to the next level. It has started hundreds of new local groups, launched campaigns that changed the outcome of elections, and inspired thousands of young people to commit their lives to solving climate change.

This year it’s going to be even better with incredible Indigenous activists, powerful speakers and inspiring experts. Get your ticket today if you’re a young person, you don’t want to miss this.

Every single win for the climate over the past 10 years was made possible by donations from people like you -- so you know you’re making a difference. Donate $8 today to power this incredible movement.

Our generation will inherit the consequences of the decisions made today by our leaders. But we’re not going to wait around for politicians to fix this mess that they’ve got us into.

Together we’re creating a better world every single day. A world where people come before profits, where we all breath clean air, and communities are free from the threat of fossil fuel expansion on their land.

It is the commitment and action of thousands of everyday people like you across the country and around the world who are standing up to fossil fuel companies that show me that we can change the course of history and create a better future.